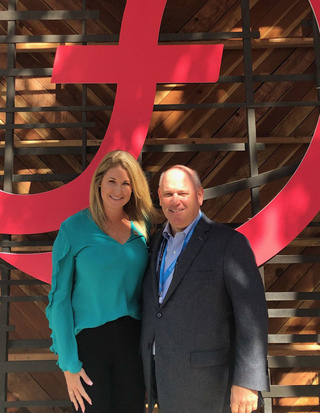 In Part 1 of our Case Study, we discovered why the Muscular Dystrophy Association trusted VFP Consulting with their integrated technology solutions. We also discussed what the NFP organization stood to gain from implementing a cohesive ERP software strategy across their 84 offices.

In Part 2, we examine the Salesforce and FinancialForce implementation process itself. What does a go-live actually look like for a company like the MDA? What can a company (and its team members) expect during a cross-country roll-out…and how long does it take to see the benefits?

Mike Kennedy of the Muscular Dystrophy Association carved out an hour to talk to me a week after the roll-out of their FinancialForce and Salesforce software. In that time he broke down five key tips for CFO’s about the implementation process.

Tip 1:  Involve your team from day one: they’re the people moving you forward.

How is your team feeling a week in?

Really, factoring in the entire implementation process, we’re 7 months in– but that has been an incredible time of transformation for us. I got a load of comments last week, after the official go-live. I’m still getting feedback from the team. It’s important to involve your team from day one: they’re the people moving you forward. We knew the systems would help us achieve our goals– that came as no surprise. The surprise was how happy and empowered the team was across the entire organization. They had the tools they needed to do their job better– and they have.

As the CFO of an organization with a 64-year history, how are you feeling about the new tech?

If you are a people-driven organization, it’s more than just technology. It’s culture, and it’s also ownership.

Everybody wants to be on a winning team, and it’s clear that our team feels like the FinancialForce implementation is giving them a chance of being on a winning team. As a leader, you want to give your team the best tools available, so they can feel that they are doing their job in the best ways possible. I didn’t fully anticipate the elated response.

Tip 2: Embrace change. Involve your team in not only accepting, but continually improving the way you work.

When did you start noticing the excitement building? Did it take a while to get everyone on board?

For something like this to work, it’s crucial that every person involved is excited to embrace change. That excitement really showed up as we built up steam in the final two months of the roll-out– once we could actually see the software, and the reality of its potential first hand. The final few weeks came out strongly. During the go-live, you could feel it in the room. All our teams were on video from around the country. There was a different tone in everyone’s voice, a completely different mood. Everybody seemed so capable and empowered, and they still do. Our culture has changed thanks to the way VFP helped us design and implement our solution–  and I feel better about that than I do the amazing data and results at my fingertips. Of course…those are very nice, too.

Tip 3: Roll with the punches (and expect some interesting findings and adjustments through UAT).

What does this software mean for you as a leader?

As with any new concept, you encounter problems that you don’t know how to fix. But the team isn’t afraid to bring issues forward. They know that they’re not on their own, and they know that they don’t have to tolerate broken systems, wasted time, or things that should only take 2 hours taking 2 weeks. Ever again. We had to roll with some punches after UAT [User Acceptance Training]. Anybody implementing a system like this will. But those adjustments are only going to make things better.

What I bring in with my role is leadership in terms of how to think with this new tool. I need to keep encouraging it, and nurturing that cultural shift in what our workforce sees as attainable. New ideas are coming up that we hadn’t expected before. I have a new base with FinancialForce that’s making every connector be reevaluated. And my team is so engaged. There’s a new feeling in the air. Now that we’ve done something tremendous in only 7 months, everybody knows that we can do tremendous things.

Tip 4: Set a clear vision and stick to it.

So, what comes next?

Step 2! As big as Step 1 was, now we need Step 2 to really go after the front-end systems– for running events, and other processes of that nature. You need a clear vision; we’ve got one, and we’re ready to keep making it happen. We have a plan to replace cumbersome front-end processes with Salesforce-driven products– like a marketing cloud, and state-of-the-art donation tools. It’s going to absolutely redefine our potential.

Once we’re able to dig into donor tools– to quickly go into those systems and determine what’s generating X revenue, or what X will cost– we’re going to be able to streamline our processes even further. Then, the final stage will be the top-tier FinancialForce platform; it can go one more step, and it’s clear to me already that we’ll benefit from it.

Fully committing to Salesforce and FinancialForce is going to allow us to efficiently manage our events so we can get the best use of our dollars. Having financial control opens the door to thinking more broadly about where our efforts are, and where we’re focused. A good part of 2019 will be spent using this data to look at the organization holistically. Is it set up to maximize revenue generation– at the most effective cost? How are we improving the delivery of our mission to these families? We couldn’t even start to think about that without a single source of data and infrastructure.

What can you say about the experience of having an implementation partner?

The success of the FinancialForce implementation, and how we did this all– how the system was brought in, accepted, and how quickly we managed to do it– is shared with a lot of people. Paul and Stephanie’s partnership was a critical part in that. They are two of the greatest, nicest people I have worked with. Overall with this project, we had an incredibly aggressive timeline. I had a lot of vendors that I could have worked with, but VFP was the only one willing to leave ego at the door and adapt their methodology for us.

We needed a consultant who could take that step back to understand what needed to be done, and then jump in and get started. VFP understood the vision and joined me in a partnership. It’s an easy word to say– but that type of relationship is the only starting point when you’re trying to create an architecture like the one we have. They pushed through the noise and were flexible enough to truly own the project. They would raise issues that I wasn’t necessarily thinking about. If we went off-road, they pulled it back. Paul had an additional role at UAT, and he ran it the same way. People thought that he was an MDA employee– that’s how invested he was in getting us the right tool.

This is not a common vendor relationship; VFP has the right mindset on how to build relationships. It’s why I don’t hesitate to recommend them. They proved to me that I can work with partners in a different way. Which is nice, because it’s the only way I want to work. Unless you co-own the vision, you’re not really a partner. The outcome looks like we delivered a system. But it’s much more. I have a whole slide for the board delivering the benefits of partnering, and vendor partner excellence.

Any final words of advice for other CFOs, CIOs– or NFPs?

You have to do it. That’s the best advice I have– especially for Non-Profits: they’re not nearly as accustomed to these processes. You have to go do it. The days of dropping in modules are over. The days of repeating steps are over. Every dollar used inefficiently is one less dollar that gets to your mission. You have to understand the importance of an investment like this. We have a truly centralized service center. We’re able to see precisely where the effort is. Everything flows.

Some Non Profits may not be able to afford to get it implemented all at once. Stephanie and Paul tell me this is something that can be built over three years if need be. There’s nothing like FinancialForce on the market right now, so don’t waste your time trying to recreate it. You won’t be happy if you just replace General Ledger– you’ll be left with the same problems. Just faster. You have to think broadly. You have to commit to removing repetition. If it’s still slow, the process isn’t right.

We are registered Salesforce® & FinancialForce partners